Jessie Mae Bryant was born in Aransas Pass, Texas on November 26, 1956, to the late Jesse Bryant and Jewel Weathers.  At a young age she gave her life to Jesus Christ and was baptized and served as an active member of Macedonia Baptist Church, Aransas Pass, Texas.

Throughout Jessie Mae’s life she always believed that her salvation was based on Jesus Christ’s sacrifice. She graduated from Aransas Pass High School in 1975.  Jessie relocated to Bay City, Texas for a short time before ultimately moving to Houston, Texas, where she lived for the remainder of her life.

During her time in Houston, she cultivated a host of close relationships through her memberships at Providence Baptist Church

and Wheeler Avenue Baptist Church, Houston, Texas. Jessie Mae was a 25+ year employee with the Drug Enforcement Administration (DEA) as an Organized Crime Drug Enforcement Task Force (OCDETF) Analyst, where she enjoyed her work and created lifelong friendships.  Because of Jessie’s work ethic she was often called upon for projects beyond her duties.  She was also known to be one of the most dedicated and hardworking people within the agency.  When Jessie would say, “Let me know if you need anything” you knew in your heart she meant it.

Jessie had an infectious laugh, and a “tell it like it is” personality that always allowed everyone to know exactly where she stood on a particular issue.  Those who knew Jessie well, were fortunate to appreciate her frankness, her passion, her honesty, and her willingness to do anything for you.  Jessie had a big heart for helping others. She demonstrated this through mentoring and volunteering for organizations dedicated to helping children, assisting with service projects at her church, and helping organize several projects benefiting fallen law enforcement officers, as well as, raising money for cancer research to name a few.  Jessie was also a true fighter, her incredible tenacity showed up in her strong will to fight and become a breast cancer survivor.

Jessie was a sports fan, football was her game, and the Dallas Cowboys was her team.  She enjoyed spending time with family and friends, attending concerts, dancing to the classics of her favorite old school artists, traveling, and trying her luck at various casinos.  She made frequent visits back to Aransas Pass to visit with her sister, Mozell, and enjoying time with her nieces, nephews, great and great-great nieces, and nephews.  Jessie was blessed to be loved by family and cherished by friends.

Get to know our faithful volunteers

I have been with the organization for 6 years.

* Responsible for creating marketing materials for both organizations.

* Coordinate and organize all volunteers for events and meetings

* Responsible for creating and distribution of agenda, meeting notices, and minutes

I believe in Young Ladies of Elegance simply because it changed my life. I believe that mentoring and

community outreach is important for today's youth. Young ladies and young men should be a part of a positive

organization that will allow them to be leaders of the future.

I have been involved with YLOE since May 2010.  My goal was to sign my daughters up for the services and

act as a volunteer wherever my services were needed.  My first position within the organization was Parent

Liaison and I quickly transitioned into the Program Manager position.  Creating curriculums, recruiting,

made to YLOE over the years.  It has been a joy working with the members of YLOE because it has allowed

me to witness the great things our members have accomplished.  I firmly believe in the mission and vision of

YLOE which is all about helping youth succeed in every aspect of their lives.

“If you don’t like something, change it.  If you can’t change it, change your attitude.  Don’t complain.”~~Maya Angelou~~ 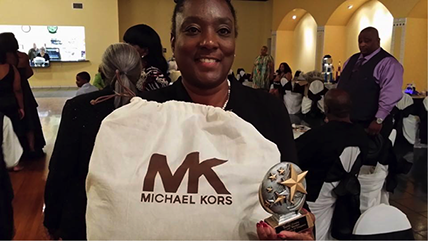 High, and La Marque High School where I graduated in 1972.  After graduation, I attended College of the

Mainland in Texas City, Texas for two (2) years on a Moody Scholarship.  I got married in 1974 and had two

(2) children. I did not complete college but did attend the University of Houston, taking Real Estate classes

and applied for the Real Estate Agent license in 1989.  Also in 1974 I was employed by the Department of

Veterans Affairs in the real estate section, Loan Guaranty Department.  I worked for the Department of

Veterans Affairs for 38 years, retiring June 2011.  After retiring I started working with Young Ladies of

Elegance and Young Men of Character in 2013 to support the program.  This program helps young men and

ladies to be leaders, to be involved in their neighborhoods, how to be positive in any situation and better

themselves.  Being a part of this group of young people made me a stronger person and encouraged me to

attend college again at Houston Community College, to complete my degree in Business Administration.  A

strong person shows love, faith and hope, and these are the characteristics that this program builds on.

“This is the day which the Lord has made; we will rejoice and be glad in it” 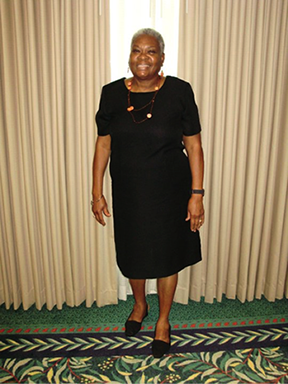 organizations. My roles have been team member of the finance committee, chaperone, and advisor. I

contributed to the organizations by sponsoring memberships, chaperoning on various trips and seminars, and

“Never give up on a child. With patience, hugs, and an ear to listen, children

can change. It takes a village to raise a child."

Active member of AKA 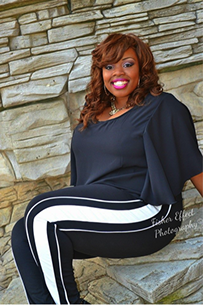 Please give what you can and help make a difference for the children in our community.

Young Ladies of Elegance and Young Men of Character Teen Service and Leadership Programs provide a variety of opportunities to help teens develop as effective and engaged citizens, now.

If you would like to know more about how you can get involved with fund raising click here.